The OABN was officially launched in September last year, so 2021 marked both our first full calendar year and the beginning of our second twelve months of activities. It’s been a year of spreading our wings, holding increasingly ambitious events and welcoming many more members to the OABN: here we offer a quick rundown of the year’s highlights. 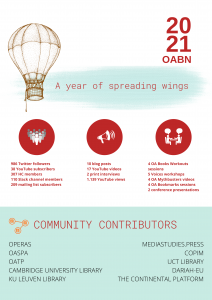 Our most ambitious undertaking this year was a series of five workshops exploring funder policies for OA books, called ‘Voices from the Open Access Books Community’. We virtually gathered around 450 participants including book publishers large and small, librarians, researchers, and infrastructure providers, together with a number of invited speakers from the field of OA book publishing, to discuss key aspects of funder policies for OA books: scope; quality & transparency; Green OA for books; discovery and metadata; and rights retention and licensing. The notes from our discussions are available to view and were synthesised into a summary document by SPARC Europe, which was presented to cOAlition S as they worked on their recommendations for OA books. These were released in September and highlighted the OABN as ‘an open forum for community input during [the] implementation process’, which we welcomed with a statement of our own. We look forward to further work in this area in the coming year.

In OA Week this year, we launched the OA Mythbusters: a new series of short (2-3 minute) videos in which members of the OABN community dispel some persistent myths about OA books. We’ve launched four videos so far, and look forward to releasing more in the weeks to come!

Episode 1: Dr. Sebastian Nordhoff, Managing Director, Language Science Press busting the myth: If I want to publish Open Access I have to pay the publisher.

Episode 2: Caroline Ball, Academic Librarian, University of Derby, UK busting the myth: People who are interested in academic books can easily access them already, whether they’re open access or not.

Episode 3: John Sherer, Director of The University of North Carolina Press, US busting the myth: Open Access means I can no longer receive royalties from my book.

Episode 4: Vincent W.J. van Gerven Oei, Co-Director of punctum books, busting the myth: I want to hold my book. If I publish Open Access, I will not have a print copy of it.

Two of our most-read blog posts this year were written by, or for, librarians. ‘Open Access books and [in]discoverability: a library perspective’ by Jayne Kelly and Clara Panozzo at the Cambridge University Library laid out some of the key issues with OA books and metadata, receiving over 1,000 views and feeding in to an OASPA webinar on the same topic. OA book metadata is an issue of increasing importance, and with the work in this area being undertaken by the COPIM project we expect to see some exciting developments in 2022. Meanwhile, Sharla Lair of LYRASIS recently wrote a hugely informative article exploring some of the new funding models for OA books, and how libraries might make decisions about whether and how to invest in these. With almost 400 views since its recent publication, this is a post that we hope will be widely shared by the library community, particularly as 2021 has seen the launch or further development of a number of new funding models including Opening the Future, Direct2Open and Fund to Mission, making this another area to watch in 2022.

This year we’ve also engaged more people and groups in the OABN. Jeroen Sondervan of Utrecht University has hosted a series of virtual events with authors of OA books, called OA Workouts: Scholars at Work, exploring the triumphs and challenges of publishing Open Access and using new tools and techniques to do so. The final event of the series with Whitney Trettien is happening on 11 January – sign up for free! We have also been invited to speak at some external events, including a session with university presses in Brazil and a soon-to-be-announced UK event next year, as well as conference appearances at OASPA and next year’s UKSG in Glasgow. The OABN has made closer links with OASPA thanks to the efforts of Claire Redhead, and we look forward to increased collaboration next year.

We have also welcomed new people and organisations to speak virtually at the OABN, including Jeff Pooley of mediastudies.press, Reggie Ragu and Jill Claasson from UCT libraries discussing the new Continental Platform for OA in Africa, Erzsébet Tóth-Czifra of DARIAH sharing a new bursary for ECRs, and the COPIM project’s experimental publishing team discussing their new report. Catch up with their talks on our YouTube channel!

We’ve also set up an OABN mailing list, which we invite you to join, to better stay in touch with our members – 307 at last count…

Thanks and happy Christmas

The OABN is ultimately shaped by the OA community. We very much look forward to hearing more from you in 2022: if you would like to share your ideas about what OABN activities you would like to see in the coming year, please tell us your thoughts in the comments section below or email us at info@oabooksnetwork.org. We would also love to hear any feedback you have about our activities this year.

We wish you a very happy, peaceful festive season, and best wishes for 2022.

Be merry and read books!

Be merry and publish OA!

This work is licensed under a Creative Commons Attribution 4.0 International License.

This site is part of Humanities Commons. Explore other sites on this network or register to build your own.
Terms of ServicePrivacy PolicyGuidelines for Participation